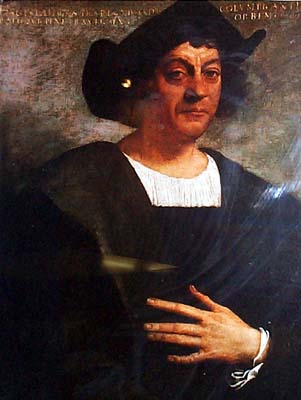 Shipwrecked off the Portuguese coast in 1476, Columbus came ashore in Portugal. near the town of Lagos, but quickly made his way to Lisbon.

The Portuguese were the leading maritime explorers of the age. Under Prince Henry the Navigator, the Portuguese proceeded to develop exploration. By 1420 the Portuguese had their first settlements in the Madeiras. Twelve years later, exploration of the Azores began. Meantime, the Portuguese were pushing down the west coast of Africa. By 1470 they reached the Equator; the next year they found gold in Guinea (present-day Ghana). Castile soon challenged Portugal by disputing the claim to Guinea and settling the Canary Islands.

Columbus courted Felipa Moniz Perestrello, whose father had been an Atlantic island colonizer before his death. When they married in 1478, commoner Columbus moved up into a noble family with access to the Portuguese court.

Columbus was sent by the Centurione and Di Negro families to Madeira as factor to handle their affairs. He was on Madeira in 1478, when the sugar transaction occurred that required his return to Genoa to testify. In the lawsuit he declared that he had a personal fortune of "more than 100 florins". The young factor had married well and risen in the world of trade.

By 1480 the couple had returned to Lisbon. There, Columbus acquired from his father-in-law's widow the charts and documents describing the Atlantic voyages. These excited him, stirring his developing interest in ocean exploration.He discovered a copy of a letter by Paolo dal Pozzo Toscanelli, respected Florentine geographer and mathematician, dated June 25, 1474. The letter displays Toscanelli's knowledge of travels to the Orient by Marco Polo and others and describes how one might travel to the East by sailing west from Europe. With the letter was a map incorporating Toscanelli's theories. The Toscanelli map and letter either began or confirmed Columbus's interest in the idea of sailing west across a relatively narrow Atlantic directly to Asia.

With his brother Bartholomew, who had come to Lisbon, he began to produce and sell marine charts. Prior to 1492, Columbus sailed extensively in the Atlantic, where he learned open-ocean navigation. He sailed to England "with the Portuguese". On that or another trip he went to Galway Bay in Ireland. There, he reported, two bodies with "strange features" had washed ashore in two small boats. In a secondary source Columbus says that in February 1477 he traveled a hundred leagues beyond Tile (Thule), where he noted the immense tides. Perhaps he had reached Iceland.

He undertook long passages southward to Portuguese Guinea and the new Castilian colonies in the Canary Islands. He had knowledge of the Cape Verdes, the Canaries, and the Portuguese fortress of Sao Jorge da Mina (Elmina) on the Gold Coast. On his long African passages Columbus, like other dead-reckoning sailors, grappled with the problems of time and distance on the open sea. He says: "In sailing frequently from Lisbon to Guinea southward, I noted with care the route followed, and afterwards I took the elevation of the sun many times with quadrant and other instruments."

He learnt to read the great oceanic wind system. Along the Portuguese coasts and in the Madeira Islands, he had experienced the strong wets winds that brought flotsam ashore from west. Then, on voyages to Africa and the Canary and Cape Verde Islands, he felt the steady northwest trades. Columbus believed he knew the secret to an Atlantic round-trip: Drop down south to go westward with the trade winds, and return at a higher latitude with the westerlies.

In late 1483 or early 1484, he approached John II, the Portuguese king, for ships and men to undertake the Atlantic voyage, offering to find Cipangu and India. The king called in experts, including astronomers and mathematicians, to judge the proposal. They turned Columbus down, believing that the Atlantic distances involved were far greater than Columbus had estimated. Nevertheless, John II secretly sent a vessel to test Columbus's theory; it returned without reaching any shore.

With his wife's death in the early 1480's and the rejection of his proposal, he abandoned his career in Portugal. He would seek support from the rulers of Castile and Aragon. In spring 1485 with his son Diego, Christopher Columbus arrived by ship in Andalusia.

Christopher Columbus, discoverer of the Americas